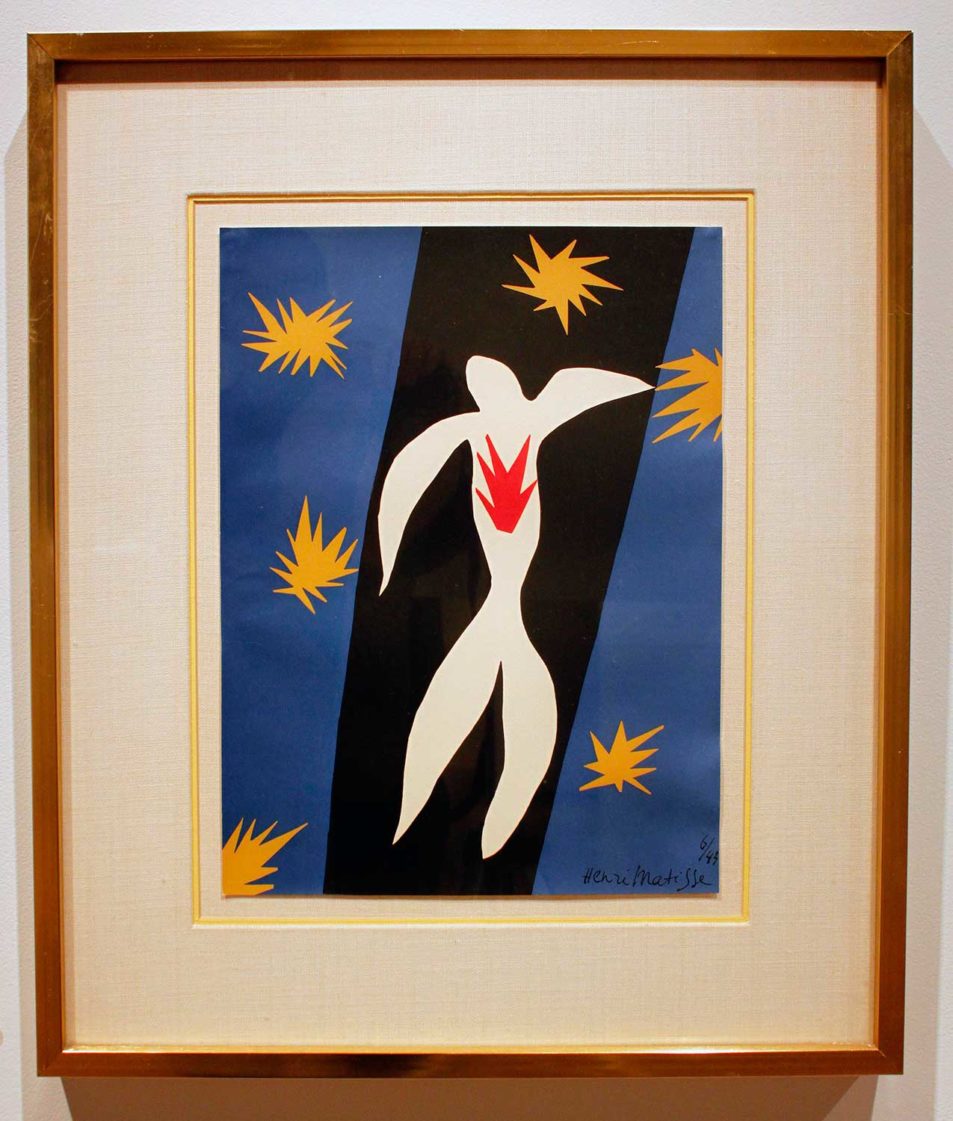 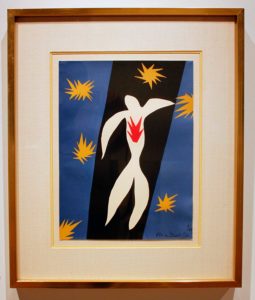 Towards the end of WWII, Henri Matisse crafted The Fall of Icarus. This piece, which measures approximately 13 3/4 inches tall and 10 5/8 inches wide, can be discovered in two forms; the cut-out and the print. The print, completed in 1944, was first displayed in “Couleur de Matisse” a unique issue of Verve magazine that focused on Matisse’s masterful use of color. Matisse supervised the making of this lithograph print, making sure it accurately depicted the original cut out. Matisse used gouache to establish the varying colored papers from which he cut each shape. On a blue background, he affixed glaring flashes of bright yellow, which simultaneously relate to the heights that Icarus himself achieved and the flashes of bombs bursting around those living in or near a war zone.  A white figure with a red form on its chest is prominently displayed in the center of the piece within a diagonal black stripe. The yellow forms and the red form were originally pinned down. The black strip and the white figure were collaged.

The work as a whole reflects France’s involvement in World War II as well as Matisse’s personal struggle. In the tale of Icarus, Daedalus and his son, Icarus, craft wings held together by candle wax in order to escape prison. When Icarus flew too close to the sun, his wings fell apart from the intense heat, causing him to meet his watery death in the Mediterranean. Around the time he created The Fall of Icarus Henri Matisse was trudging through a difficult period of his life. In 1939, at age 70, he divorced from his wife of 41 years. His health began to decline around this time as well, with his eyesight worsening and his ability to move becoming increasingly impaired. At this time Matisse surely identified with Icarus, who soared too high and lost his life.  Not only was Matisse’s personal life in shambles, but his French homeland had plunged into the chaos of WWII. The war profoundly impacted Matisse as the German military made their way through Europe, pillaging and conquering. His physicians speculated that the stress of the war was causing his health to decline. However, Matisse was able to find a way to surmount his struggles through his art. Prior to the cut-outs, Matisse was working with linocuts, an art form where one cuts into a piece of linoleum in order to create a reproducible image. As Hillary Spurling describes, “Linocuts gave him the spontaneity and directness he wanted” (p. 418-19). These linocuts served as inspiration for the cut-out.  Speaking of these well-known pieces, Matisse stated that “the sensation of flight which emanated from me helped me better to adjust my hand when it used the scissors…it’s a kind of linear and graphic equivalence to the sensation of flight” (quoted in Friedman 2014, p. 112-15). The cut-outs allowed him to create images in a way that was not as manually laborious as traditional oil painting.

Henri Matisse lost his ability to pursue his passion for painting due to his fading health. Yet even through this tumultuous period, Matisse summoned the willpower and inspiration to explore his thoughts and feelings through new mediums. The cut-outs challenged conventional ideas and ways of working. With this new medium, Matisse pioneered an innovative type of painting. The Fall of Icarus epitomizes the cut-outs with its bright, contrasting colors, irregular shapes, and impeccable composition. Not only did it incorporate all the themes of Matisse’s work, but it also was highly symbolic of his own personal struggles and the conflict that was raging throughout the world.