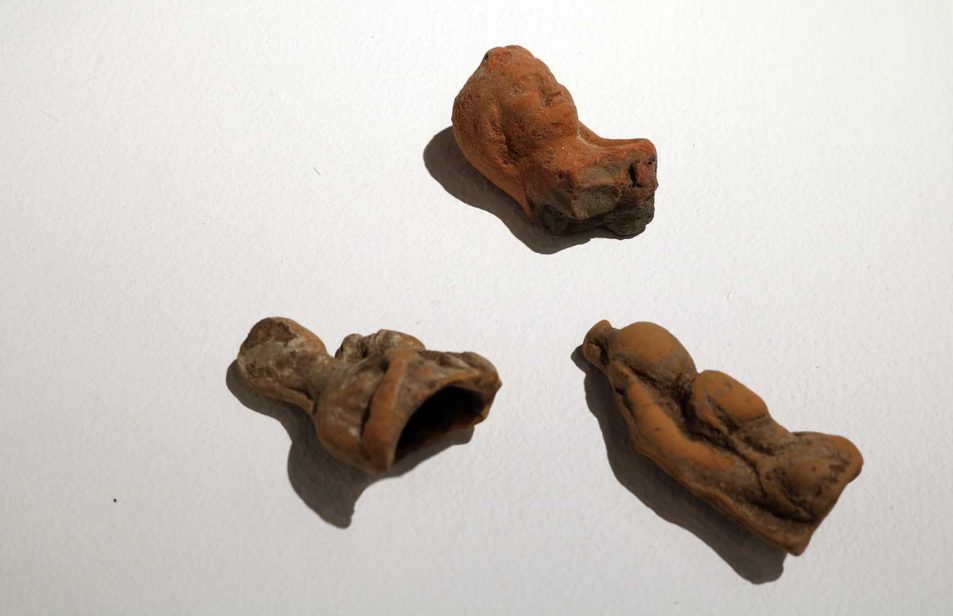 The Grand Tour was a coming of age trip for aristocratic Europeans during the fifteenth- through seventeenth-centuries.  After a student finished his studies in Oxford or Cambridge, he would visit different cities, including Paris and Rome, among others.  The primary purpose of the trip was to expose young men to polite society of the Continent and the handiwork of the Renaissance and the Classical periods.  During this time travelers learned as much as they could and would hone skills in areas such as language and dance, but interest would often lie in the collecting of curiosities or works of art.  The three figurines in our exhibition may likely have been souvenirs of such a trip.

The fragments were originally ancient Egyptian religious objects and later became souvenirs during the Grand Tour.  All three figures have been broken into smaller fragments, leaving only the pieces displayed in the exhibit.  They are made from terracotta ranging from brown to almost orange and are rather worn.  This makes their facial features difficult to see.  One of the figures is hollow, while the other two are solid terracotta.  All of the figures appear to be women and are small in size (each is no more than three inches long).  One figure has a child attached.  Her arm is bent at the elbow across her chest.  The second figure is reaching up to balance a vase on top of her head.  The third piece is merely a head broken off at the sternum.

We do not know the name of the artists who created these objects.  The figurines are from ancient Egypt, which dates them between 3,000 and 30 BCE.  They were votive figures likely used in religious ceremonies.  Sometimes similar figurines would be left by the walls of a temple as dedications or offerings.  The ancient Egyptians believed that objects were imbued with a certain power, and that they could affect outcomes in life and in the afterlife.  One Egyptian interpretation says that the figures were made as fertility symbols for local temples.  The childlike figure next to one of the women would support this hypothesis, because complete figurines portraying children have been found along with fertility and childbearing votives in the Precinct of Mut in the present day city of Luxor.  All of the figurines had been purposely and perhaps ritually broken once they were no longer useful.

Large scale collecting was not new during the Grand Tour.  Upon his ascension to the English throne in 1625, Charles I began to send out agents to Greece and Rome to gather ancient statuary for his private collection.  For those on the Grand Tour, souvenirs would serve as indicators of status.  Souvenirs were an important part of travelling on the Grand Tour–well-to-do travelers would return laden with statuary, paintings, jewels, and other curiosities.  Despite Egypt’s unpopularity as a travel destination, the long standing tradition and popularity of the Grand Tour instilled a desire to travel and collect antiquities among English elite during the following decades.

The late 1800s and early 1900s were full of new and exciting discoveries in the field of Egyptology, including Howard Carter’s discovery of King Tut’s tomb in 1922.  The primary motivation behind the excavation of ancient sites was the chance to discover treasures or oddities that would go into private collections.  The three figurines in our exhibition were possibly brought back during this period as souvenirs, since the height of Gilded Age Newport coincided with the surge in interest with ancient cultures.  Even though they are merely fragments, the three Newport figurines are appropriate symbols of Grand Tour and 20th-century collecting by European and American elites.

Haskell, Francis, and Nicholas Penny. Taste and the Antique: The Lure of Classical Sculpture,

Waraksa, Elizabeth A. Female Figurines from the Mut Precinct: Context and Ritual Function.