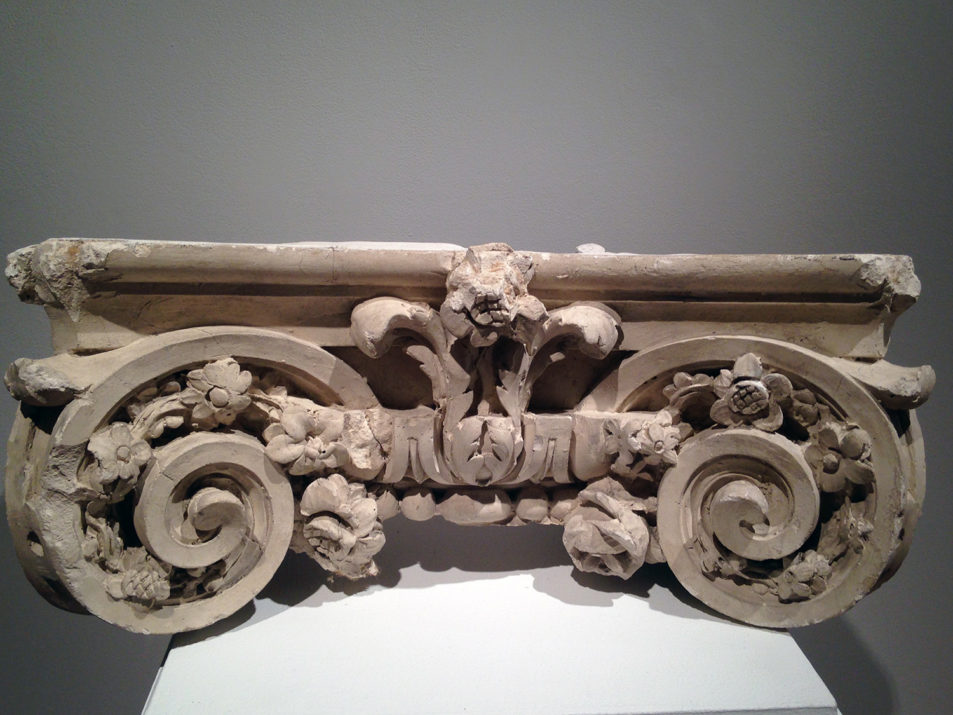 John Russell Pope was a leading figure in 20th-century American architecture whose influence is still relevant today.  His most noted works include the Jefferson Memorial and National Gallery of Art in Washington, D.C.  Yet Whiteholme, a Newport, Rhode Island mansion that no longer exists, remains Pope’s first independent commission.  Its elegant French style clearly shows his early interest in restrained classical design, a concept that earned him high praise.

This Ionic pilaster capital is an architectural remnant that once decorated Whiteholme.  Designed ca. 1901 by John Russell Pope, Whiteholme was built as a summer villa for Mary Frick Garrett (later Mrs. H. Barton Jacobs), widow of Robert Garrett, president of the Baltimore and Ohio Railroad.  At the turn of the century, Newport, Rhode Island was a summer social capital for the rich and famous, where mansions like Whiteholme were built to impress high society members.  While many of these great Gilded Age mansions survive, Whiteholme marked a significant loss in Newport’s otherwise outstanding portfolio of American architecture.  It stood impressively at the corner of Narragansett Avenue and Ochre Point Avenue, in one of Newport’s most desirable neighborhoods.

Unfortunately, after many years of neglect, Whiteholme was razed in 1963. Today the site is home to Miley Hall and Walgreen Hall, part of Salve Regina University’s campus. This pilaster capital is a surviving remain from the decoration of the mansion.  It once adorned a pilaster next to the main entrance of Whiteholme. It is a small piece of decoration which embellished an otherwise plain square pilaster at the entrance of the mansion. The grand wrought-iron doors to Whiteholme were flanked by a pair of two-story Ionic columns with square pilasters and matching Ionic capitals. The design of the capital clearly demonstrates Pope’s sophisticated use of classical decoration, where overall form is more important than decoration.

Pope’s earliest commissions were heavily influenced by French classicism and an interest in European architecture and culture that he developed during his training at France’s École des Beaux-Arts, considered the best school of architecture in the western world at the time. The exterior design of Whiteholme drew from the Parisian Neo-Baroque architecture of the 1860s, with bulging rounded forms and subdued decoration. This pilaster capital is an important visual representation of John Russell Pope’s unique creativity and experimentation with classical forms in architecture at the very beginning of his long and celebrated career.

This capital shows important cultural connections between America and Europe in the early twentieth century when wealthy Americans looked to Europe for inspiration in art, design, and culture. Americans, at the time, sought to emulate European models because such traditions were associated with knowledge, power, and taste. Whiteholme conveyed a message of wealth and taste to the rest of the world.  This surviving architectural remnant from Whiteholme gives us a better visual understanding of the mansion in its original context, and it allows us to study the beginning of John Russell Pope’s important career.

Yarnall, James L. Newport through its Architecture: A History of Styles from Postmedieval to Postmodern. Hannover, NH: University Press of New England in association with Salve