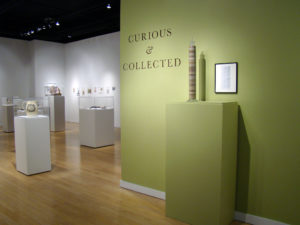 “Encountering Wonders:  A Virtual Cabinet of Curiosities from Newport Collections” re-imagines the cabinet of curiosities for the 21st-century viewer through the creation of an interactive digital exhibition space, which we invite you to explore.  This digital humanities project accompanies the “Curious and Collected” exhibition that was held from January 26 – March 8, 2017 in the Dorrance Hamilton Gallery at Salve Regina University in Newport, RI.  This website allows our cabinet of curiosities to have a new “virtual” life and to exist in perpetuity for further enjoyment and study.  Contextual essays about the objects in this cabinet are the work of undergraduate student-curators from an upper-level Art History class at Salve Regina University during the spring 2017 semester who worked on the “Curious and Collected” exhibition.

Our “Cabinet of Curiosities from Newport Collections” exhibits a wide array of images and objects ranging from 8,000 BCE through the 20th-century that come from several private and public collections.  Institutional lenders to this project include the Newport Historical Society and Salve Regina’s Cultural and Historic Preservation program, as well as works from the private collections of James Baker and Nicholas and Shelley Schorsch.

The curiosities that you will find in our online cabinet tell unique stories and elicit a sense of wonder.  Here you will find, among other treasures, ancient Egyptian figurines and 18th-century dancing automatons, a Masonic vessel with secret symbolism and antique dental tools, a bearskin dollhouse rug and an enigmatic mermaid vessel, a New York City subway window tagged by Keith Haring and Jean-Michel Basquiat and a Victorian shellwork figurine.  We hope that our cabinet of curiosities will capture your imagination and instill in you a sense of wonder of how objects can both tell us about the past and remain mysterious. 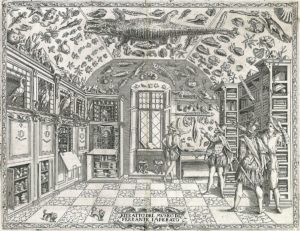 Cabinets of Curiosities are collections of natural and human-made wonders first created by Renaissance princes to study the world, to organize knowledge, to display wealth, and to engender learning.  This urge to develop “collections,” however, arguably can be traced back even earlier to ancient temple and Medieval church treasuries.  Also called “Kunstkammer” or “Wunderkammer,” the Cabinet of Curiosities highlights the intellectual, scientific, and artistic impulses that formed the origins of the modern museum.

The earliest visual representation of a Renaissance cabinet of curiosities is the engraving from the pharmacist Ferrante Imperato’s Dell’Historia Naturale, published in Naples in 1599, which depicts the author’s collection of natural wonders.  Imperato’s collection features shells, birds, sea creatures, fossils, and taxidermied animals, among other specimens.  Hanging prominently overhead is a crocodile, a staple of such research collections, which engaged in the contemporary debate over whether the creature was an animal or mineral.  The books displayed in Imperato’s engraving also underscore the importance of libraries in such collections, as both specimens and books catalogue, systematize, and display knowledge.  Another important early source on museums and collecting is the Flemish physician Samuel Quiccheberg’s 1565 book Inscriptiones, Vel Tituli Theatri Amplissimi, which discusses the classes of objects to be collected and how to organize them.  These sources reveal the Early Modern endeavor to systematize an encyclopedic amount of knowledge and reflect the human desire to understand better the world around us and our place in it. 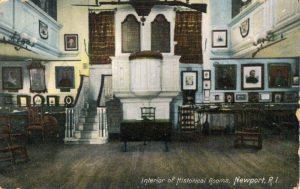 What are we trying to accomplish when we collect? Something we care about, admire, or enjoy is always a pleasure to possess. When people choose to accumulate and save things, they are making a statement about what is important, interesting or lovely on a personal level. People have collected art forever, but we do think differently about the “seriousness” of collecting today. Saving toys, shoes and cars was not considered an important cultural activity a few decades ago but today these are highly collectable items. These items have monetary and emotional worth, and owning them is a personal statement that reflects the values of the collector.

When museums and historical societies collect for the future, they also make a statement about what they think is, or should be important, but they make it on behalf of everyone. In addition, by preserving their collections, they are asserting a message about what people in the future should know about the present. This sense of what is important, what message we want to send the future about who we are and what we care about, is of course bounded by our cultural, behavioral and ethical norms.  It changes over time – to become more complete, or perhaps narrower.

The Newport Historical Society has been collecting for 160 years. Initially the Society assembled papers and books as they sought to gather information about Newport’s history and its place in the American story. Collecting objects, furniture, paintings and photographs came later, and colonial-era buildings last of all. How the NHS thought about history evolved with time; the “relics” and “ancient supernumerary buildings” were not seen as more than curios in 1860; but as time went on, ideas about what was important to collect to encompass and preserve our history evolved.

At some point the NHS simply began to accept absolutely everything that related to Newport – receipts, souvenirs brought home from trips, scrap books and medicine bottles. This encyclopedic approach to collecting has resulted in a broad array of information, and objects, which we can then use to interpret Newport’s history. But, it also creates a problem. Think about it: if we continue to collect everything, we will never stop needing more storage, and the unlimited resources required to care for everything responsibly. This is not sustainable, so we have begun to ask ourselves what is important for us to collect, both for our audiences today, and to fulfill our responsibility to preserve for the future. We contemplate narrowing our focus. It’s hard to do so, when faced with the many evocative and interesting things – from matchbooks to computers – that we use and throw away each day. So we ask, what is important for us to save? It is the hardest of questions, but worth asking. The future is unknowable, and we are sending a message in a bottle by preserving what we collect.

Today the Newport Historical Society’s collections include five historic properties, manuscripts, fine and decorative arts, furniture, musical instruments, textiles and clothing, artifacts of everyday life, architectural fragments, photographs comprising over 200,000 images dating from the 1840s to the present, postcards, prints, maps and scientific instruments.  Most recently, we have begun to collect “born digital” images of the world as we know it today. The Society’s collecting activities seek to encompass the full range of social and cultural diversity that makes Newport County unique – in a reasonably small package. 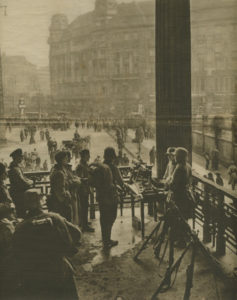 Things collect us.  They entrap our consciousness by mystery and wonder, they stir our memory and illuminate our imagination.

We can search by design, but accidental encounters are the most rewarding.

Out of nowhere an object will reveal itself as a bearer of surprising revelations, an emissary of a secret world, speaking a new language of the senses that we immediately understand.

Objects of infinite splendor and variety from the natural world, or things of craft and industry from the man made world, each and all freshly created or in decline, conditioned by the elements and time, are waiting for our attention.  Things that have reincarnated themselves by becoming unrecognizable from their original purpose, by remaining long un-noticed or neglected, eroded or decayed, and are now transformed.  Things exclusive and rare or accessible and common place, things that will find their true value in the heart of the collector.  They teach us that if we observe and respond, gather and sort, edit and arrange, that we can learn to invent a new world of our own – called a collection.

All of these things hold the record of their life over time – what are they are and how they came to be – the essence of each – their condition – their history – they give us knowledge.

Amazing things are to be found on a walk through a field or along a beach, at a yard sale or flea market – and then there is the Internet.  The unique atmosphere of a sense of place has been supplanted by a generic magic lantern, vast in its glare and accessible from a chair.  Few now brave the winter trudge along the middens of Dead Horse Bay in Brooklyn or on a balmy spring day stroll the endless stalls of Les Puces de Montreuil in Paris.  Ebay is now the place to find anything, quickly and efficiently.  It is more of a research tool than a poetic pilgrimage.

Potsdamer Platz, Berlin, March 20, 1920, is where I started my journey into Twentieth Century history.  A credit card was my visa and an old faded brown photograph my travel ticket.

Old photographs are especially available on the Internet.  They are plentiful, generally inexpensive and easy to ship.  Browsing by topic, especially an unfamiliar one, can be an adventure.  I chose “Weimar Republic” because it was the name of the politically and culturally turbulent period in German history that led up to the Third Reich, and when The Threepenny Opera was created.   There was a lot going on at the time and good cameras were popular.

The photograph (on Ebay Germany) that held my eye was small, but had a large sense of drama: a group of soldiers in the shadow of a portico overlooking a public square, on the far side of which a crowd of civilians was gathered – both groups, the soldiers and the civilians, seemed equally still and expectant.  The image had interesting compositional and psychological tension and I bought it.

On the back of the photograph had been written the date and place that it was made.

As this collection grew it evolved into an artwork and a dual theme emerged: that of the tragic human compulsion toward self-destruction and the noble struggle for redemption and rebirth.  I found images relating to the Icarus myth and the Phoenix legend that symbolized these conditions and I created other original visual metaphors as well.

Now, three years later, I have a collection comprised of images and artifacts that document a place whose history resonates over time.  Today I see it as a work in progress.