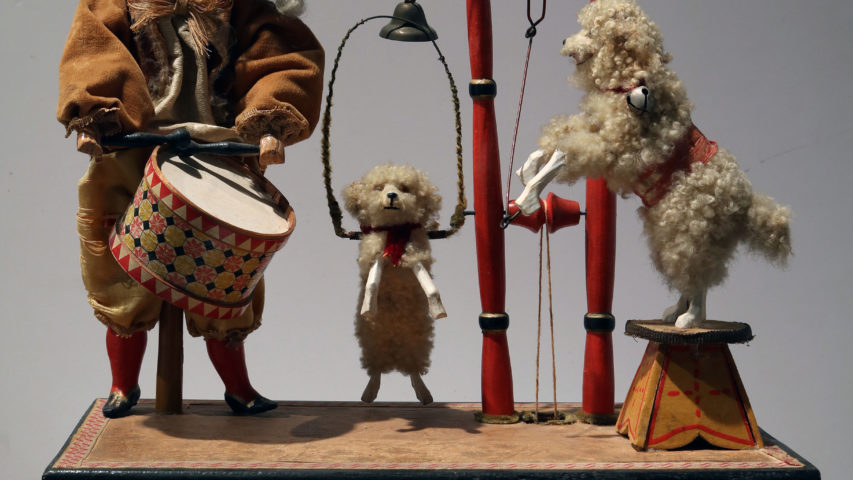 Metzner, Paul. Crescendo of the Virtuoso: Spectacle, Skill, and Self-Promotion in Paris during the Age of Revolution. Berkeley: University of California Press, 1998.

John Russell Pope was a leading figure in 20th-century American architecture whose influence is still relevant today.  His most noted works include the Jefferson Memorial and National Gallery of Art in Washington, D.C.  Yet Whiteholme, a Newport, Rhode Island mansion that no longer exists, remains Pope’s first independent commission.  Its elegant French style clearly shows his early interest in restrained classical design, a concept that earned him high praise.

This Ionic pilaster capital is an architectural remnant that once decorated Whiteholme.  Designed ca. 1901 by John Russell Pope, Whiteholme was built as a summer villa for Mary Frick Garrett (later Mrs. H. Barton Jacobs), widow of Robert Garrett, president of the Baltimore and Ohio Railroad.  At the turn of the century, Newport, Rhode Island was a summer social capital for the rich and famous, where mansions like Whiteholme were built to impress high society members.  While many of these great Gilded Age mansions survive, Whiteholme marked a significant loss in Newport’s otherwise outstanding portfolio of American architecture.  It stood impressively at the corner of Narragansett Avenue and Ochre Point Avenue, in one of Newport’s most desirable neighborhoods.

Unfortunately, after many years of neglect, Whiteholme was razed in 1963. Today the site is home to Miley Hall and Walgreen Hall, part of Salve Regina University’s campus. This pilaster capital is a surviving remain from the decoration of the mansion.  It once adorned a pilaster next to the main entrance of Whiteholme. It is a small piece of decoration which embellished an otherwise plain square pilaster at the entrance of the mansion. The grand wrought-iron doors to Whiteholme were flanked by a pair of two-story Ionic columns with square pilasters and matching Ionic capitals. The design of the capital clearly demonstrates Pope’s sophisticated use of classical decoration, where overall form is more important than decoration.

Pope’s earliest commissions were heavily influenced by French classicism and an interest in European architecture and culture that he developed during his training at France’s École des Beaux-Arts, considered the best school of architecture in the western world at the time. The exterior design of Whiteholme drew from the Parisian Neo-Baroque architecture of the 1860s, with bulging rounded forms and subdued decoration. This pilaster capital is an important visual representation of John Russell Pope’s unique creativity and experimentation with classical forms in architecture at the very beginning of his long and celebrated career.

This capital shows important cultural connections between America and Europe in the early twentieth century when wealthy Americans looked to Europe for inspiration in art, design, and culture. Americans, at the time, sought to emulate European models because such traditions were associated with knowledge, power, and taste. Whiteholme conveyed a message of wealth and taste to the rest of the world.  This surviving architectural remnant from Whiteholme gives us a better visual understanding of the mansion in its original context, and it allows us to study the beginning of John Russell Pope’s important career.

Yarnall, James L. Newport through its Architecture: A History of Styles from Postmedieval to Postmodern. Hannover, NH: University Press of New England in association with Salve 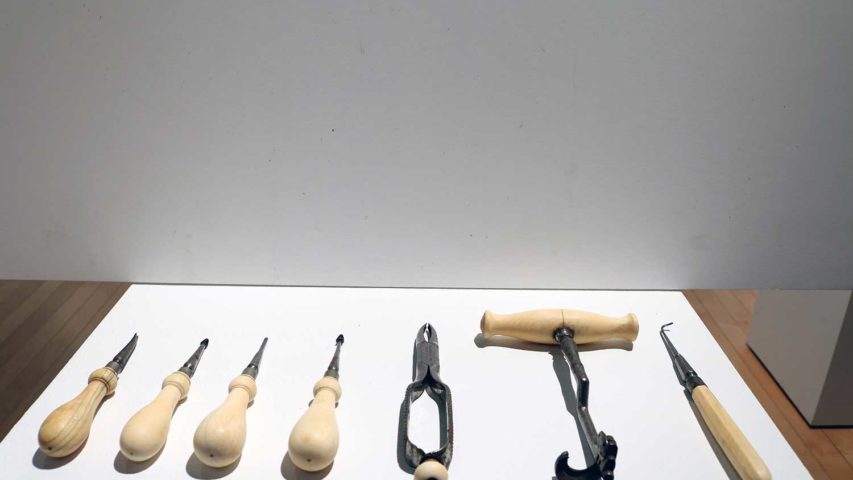 Everyone dreads having a tooth pulled, and tool sets dedicated to tooth extraction are not new.  There was a tool set dedicated to solely tooth extraction. In the field of mid-twentieth century dentistry, the extraction set was critical to oral hygiene. The advancements in dental extraction sets can be seen in one such set from 1950 in the collection of the Newport Historical Society. Developments and advancements in design of such dental tools helped the field of dentistry to become more advanced than other medical fields, but it was not until the 19-century that such tools were created. Many of these tools came in a small box that had each tool lined up with their various attachments.

Tooth extraction was one of the few surgical operations that was known to not affect the rest of the body.  There were still many dangers, however, that came with the procedure. To see how dental tools changed over time, one can examine two of the most popular tools in the Newport Historical Society’s dental extractor set—the lever and the tooth key. Both of these tools were made out of steel with a wooden handle. The lever has a long narrow handle and a metal part that is about three inches long with a 90-degree angle at the flattened end (Figure 1). This tool was used to easily pry stubborn teeth from its socket. The tapered blade was inserted between the root and the adjacent tooth, and a turning movement would elevate the tooth from the gum. As some teeth were more challenging to pull out, the lever needed some improvements, thus creating the more widely used implement in the set:  the tooth key.

The “tooth key,” designed in 1742, made extracting teeth easier and quicker for the patient. Appropriately named, the tool looked like an old fashion key. This instrument is a powerful lever used for extractions by putting the bolster (flat part of the tool) against the root of the tooth and the claws engaged over the crown. The key was then turned in a quick rapid motion until the crown came out.  This tool has a distinct handle that is longer in width than all other tools in the set; the handle is about three and a half inches wide and a half of an inch tall at its thickest part of the handle. It has a long metal curving attachment to the wooden handle and has many bends in the metal part. Three moving parts on top of the tool move back and forth, pivoting around the main frame of the tool. One is curved with a single point at the end; the second is similar to the first but it has an indent at the top of the curve that creates a small “V” shape on it. Lastly, the third moving part is an oval flattened piece of metal that moves up and down slightly above the two curved parts, and has small holes in the flattened part. The tooth key changed in design over time.  Earlier examples show that the handle was changed to increase the amount of pressure possible on the tool. It is clear to see that the tool first was given its name due to its key shape.

Limited access to proper anesthesia in the 1950s made many people afraid to go to the dentist. They preferred to endure the pain of a toothache rather than having a tooth extracted. The lever and the tooth key were only used when a tooth was beyond repair. Both easy and quick to use, these instruments were included together in sets. The tooth key offered a more aggressive tool, but if used improperly could cause gum and jaw damage. Also, it was not used for all extractions. Constant changes in technology required that the tools in such dental sets evolved over time. There will always be a need for dental care, and the individuals performing such procedures will only be as good as the tools to which they have access.

Guerini, Vincenzo. A History of Dentistry: From the Most Ancient Times Until the End of