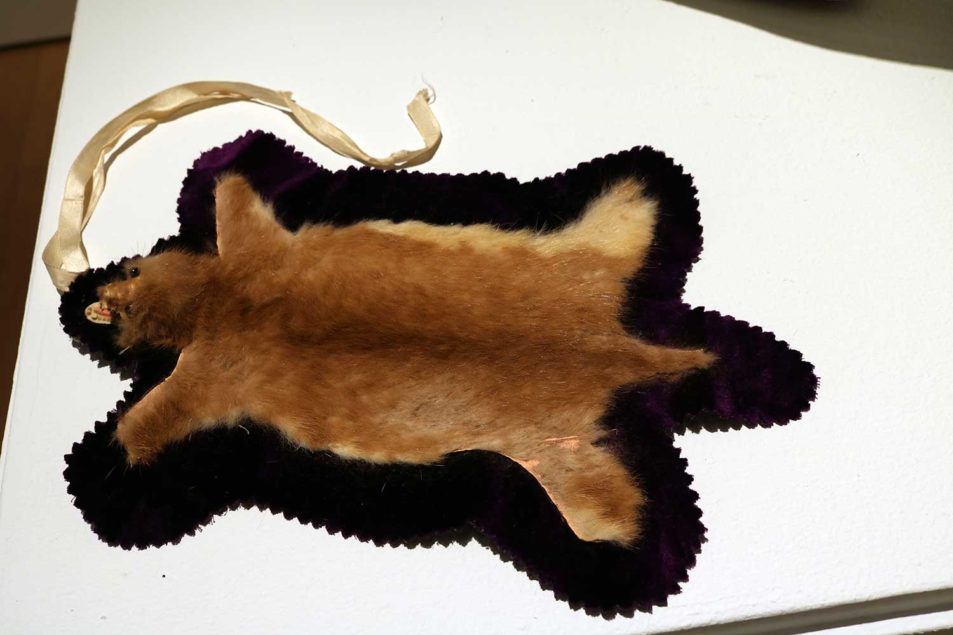 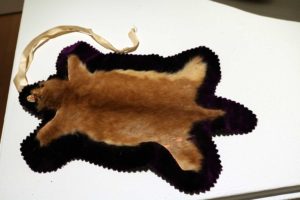 Fur and other media

Imagine that you are sitting in the house of a Victorian era family. There is a father, a mother, and a few children.  One of these children might be a little girl who could have played with a dollhouse.  Some would say that the doll house offers a way for the girl to be able to entertain herself. But in another house the dollhouse sits in a well-lit room centered on a pedestal to show off the material goods the family may own.  The bear skin rug in our exhibition would have once been used as a decoration in such a doll house, probably from the 19th-century.

The Dollhouse Bear Skin Rug measures half a foot in length from its head to toe and is made of an unknown animal fur.  The hide of the animal rests upon a felt cloth. With its arms and legs outstretched, the animal resembles a taxidermied bear. The fur is various shades of brown and white, and its texture is rough around the edges.  The felt cloth surrounding the animal is purple. Towards the head a white ribbon is attached and extends from the felt cloth.

Unlike the body, the head of the animal is three-dimensional, which has been flattened with its legs stretched out to the sides. The mouth of the animal, although not intact, is shown to have been open and may once have had teeth. The nose is no longer present.  The lower jaw rests upon the purple felt that surrounds that rest of the body. The eyes of the animal protrude from its head and the fur between the eyes is worn down.  The animal lies flat on the ground, a rug for a doll house like one that may have been used in a Victorian home.

Rugs in the Victorian era were both decorative and functional, markers of status and class.  The combination of colors on this particular rug were in fashion during this period.  Over time, the doll house has become gendered “feminine”.  Now we again see the little girl of our hypothetical Victorian era family playing with such a toy. The physical object of the dollhouse symbolizes household domesticity and indoctrinates her in expected gender roles.  Little girls may have used dollhouses to imagine their futures, but their futures would likely be predetermined to focus on managing a household.  Doll houses and their decoration offered girls a glimpse of their futures and inscribed contemporary gendered expectations.

Overall, The Dollhouse Bearskin Rug is an object of great importance because it allows us insight into the material world and culture of the Victorian period, both historical reality and the imagined life of girlhood.  The rug brings us back to an age that reminds us about what domesticity was once thought to look like.