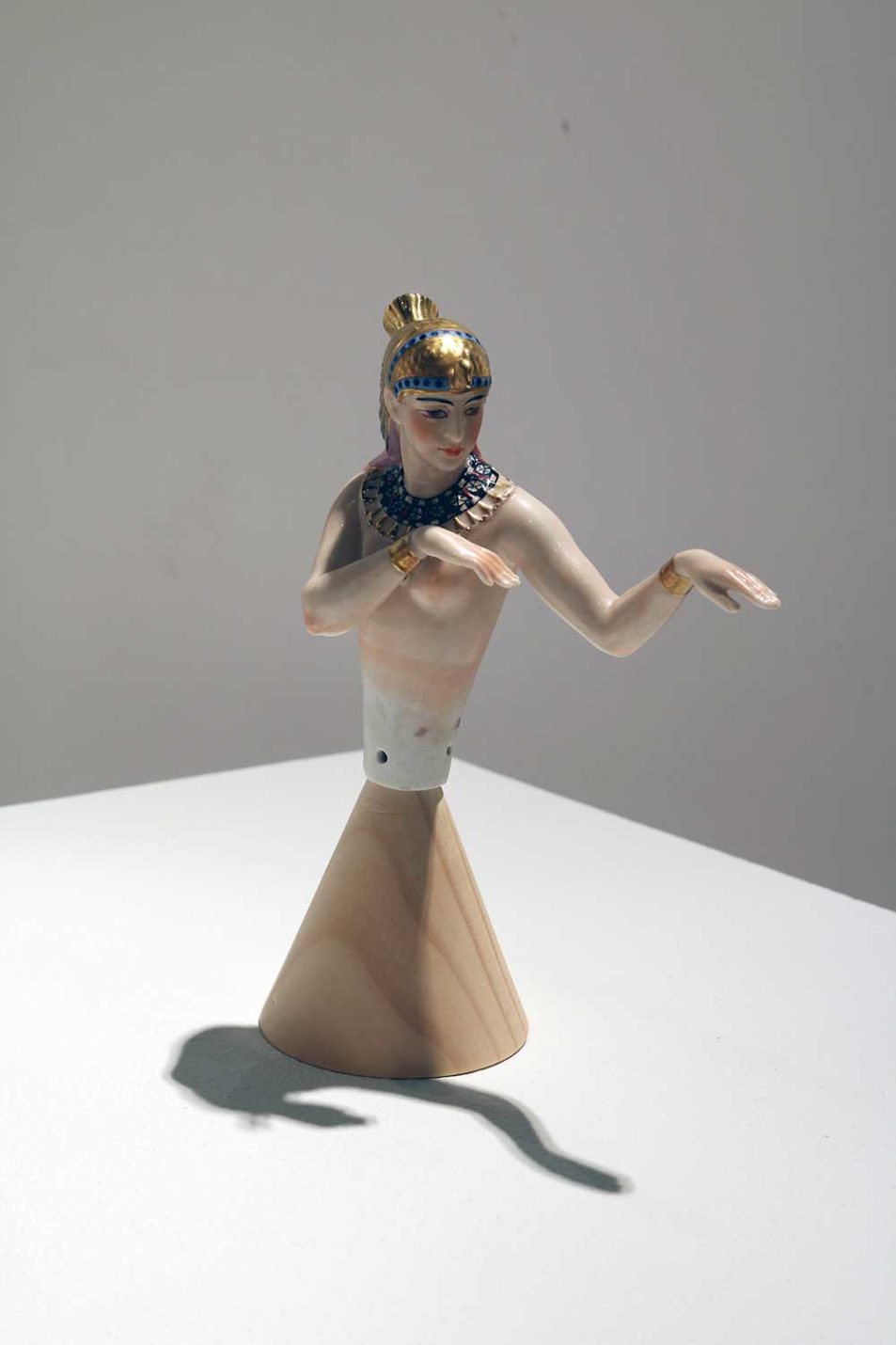 From 1880 to 1940, the Dressel and Kister Company in Passau, Germany was a well-known manufacturer of half-dolls throughout the entire world, and Germany was a European center of porcelain production. A half-doll usually refers to a doll that has the upper half of a human figure without legs so that it could be attached to something useful such as a pin cushion, whisk brooms, tea cozies, and numerous things that can adorn a lady’s dressing table. They range from one inch to nine inches in height.  The two figures in our exhibition were made by the Dressel and Kister Company.  One depicts an Egyptian figure and the other the Biblical Eve.  Such dolls were made of Chinese porcelain, papier-mâché, wood, plaster, celluloid and wax, materials that could create strong but visually delicate objects. Dressel and Kister half-dolls can be identified by an odd upside down blue question mark either on the tapered base or inside the opening. The mark is painted free hand and in bright blue. There is, however, no mark to identify the artist who originally designed the doll. The inspiration for these half-dolls came from portraits. Many of the half-dolls were modeled nude, with a narrow tapered waist that was left unglazed. Their designs are more closely related to the style of the late Rococo period.

The two half dolls in our exhibition are from the 1920s.  The Egyptian Figure is six inches tall and decorated beautifully with a great deal of color. It is very rare to find half-dolls with limbs extended as they are with this figure. Usually half-dolls have their limbs attached to the torso in a “closed” pose. This half-doll has holes on the base of its torso. That is where the doll would be stitched to cloth. Egyptian objects were common in the early 1900s due to the popularity of Egyptian culture at the time.  Our Egyptian figure is exquisite for its excellent condition, another rare feature.  The gold inlaid head piece, necklace and bracelets are well preserved. The Egyptian Figurealso represents both the popularization of Egyptian fashion and the empowerment of women as this half-doll represents a female pharaoh. Egyptian half-dolls can also have different skin colors and ornamentation, which helps to determine the Egyptian era the half-doll is meant to portray. The Egyptian Figure is of a lighter more “European-esque” type of complexation—a more peachy or pink type of tone instead of a dark-skinned or olive skin tone.

The half doll of Eve is a more common type of half-doll as she likely reminded people of biblical stories.  What is unique, however, is her unusually long, curved waist.  She is six inches tall and has holes in her torso where cloth could be attached. These objects also provide insight into the cultures that created them and for the significance of half-dolls in everyday households. Eve represents the biblical story of Adam and Eve, which in the early 1900s was an important story.  It is the story from the Book of Genesis in the Hebrew Bible about the creation of man and woman, a story that is also about good and evil. God tells both Adam and Eve not to eat from the tree of knowledge but they become tempted by the devil to eat a golden apple from the tree. The first one to take a bite is Eve. The half-doll figure of Eve is seen as if she is contemplating whether or not to take a bite from the apple.

The half-dolls of the Egyptian Figure and Eve belong to a lost tradition.  Both half-dolls are rarities for surviving in such excellent conditions.  Half-dolls that are this intricately crafted and beautifully preserved today are miracles in themselves, as these dolls truly capture beauty.