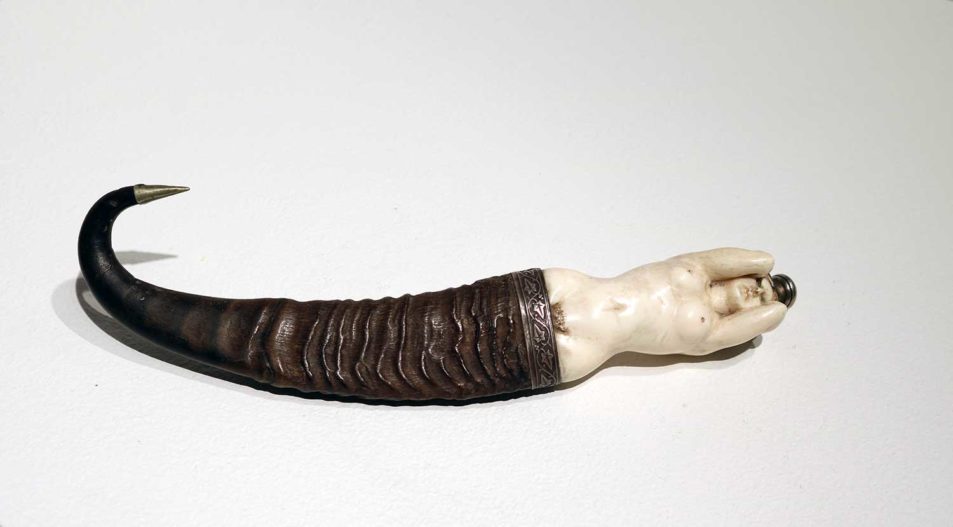 The Collection of Nicholas and Shelley Schorsch

This mermaid vessel is an object of unknown origin, purchased from a small antique shop in Newport, Rhode Island that serves both functional and aesthetic purposes.  The object is roughly nine inches long with an ivory body and hollow horn tail that allows liquid to be stored.  The metal screw attached to the mermaid’s head caps the liquid this object could hold.  This vessel’s materials, techniques, and patina suggest that it was made in the mid- to late0- 1800s or early 1900s. The upper half of the sculpture is made out of ivory. The female figure depicted is naked with an hour glass shaped body.  Her back is arched displaying a flat stomach, belly button indent and a horn tail that starts where her pubic hair begins.

The half-woman/half-fish anatomy of this figure seems to portray a mermaid, but the more sexualized representation aligns more closely with the tradition of sirens, a common conflation in art and literature. Sirens were known for luring sailors into shipwrecks with their songs and seductive bodies. Mermaid folklore usually involves taming the mermaid and making her a good wife or possession. Many cultures have interpretations of sirens and mermaids with ties to literature, folklore, and artifacts. Some would argue that sirens and mermaids are actually the same creatures simply referred to differently because of the various cultural backgrounds from which they come. Tales of sirens date back to Greek mythological stories, appearing, for instance, in the Odyssey.  The figure’s exposed pubic hair and breasts along with her arched back and hourglass figure suggesting sexuality and temptation have more in common with siren-based mythology than the mermaid folklore and imagery that we see so commercialized today.

The mermaid vessel is most likely made by a skilled scrimshaw craftsman who could have even been a sailor.  While research produced no close comparisons, the detailed carving of the mermaid’s body and face resembles the kind of scrimshaw found on canes or walking sticks.  They are carved from the same materials and depict similarly detailed imagery.  The tail of the mermaid is interesting because it looks similar and relates to material in the classic powder horns or flasks that were used to store gun powder. While the mermaid vessel has many similarities to walking sticks and other nautical artifacts, it is not similar enough to make a definitive conclusion regarding its origins.

The Department of Chemistry at Salve Regina University conducted chemical testing of the mermaid vessel to determine the nature of the material it might have stored.  The test results were not able to determine this with more than forty percent accuracy, but the compounds detected point towards a substance of medical or medicinal use like perfume, drugs, alcohol or poison.  The shape and layout of the object suggest that it stored liquid rather than a cream or powder.

We could imagine that this object was owned by the captain of a whaling ship leaving Newport or Nantucket in the late 18th-century.  It could have been left on his writing desk or bedside table as a gift or a souvenir of a particular journey.  It is an alluring object that was probably once used for storing small quantities of vital medicine in case of illness.

Lao, Meri. Seduction and the Secret Power of Women: The Lure of Sirens and Mermaids. Rochester, VT: Park Street Press, 2007.