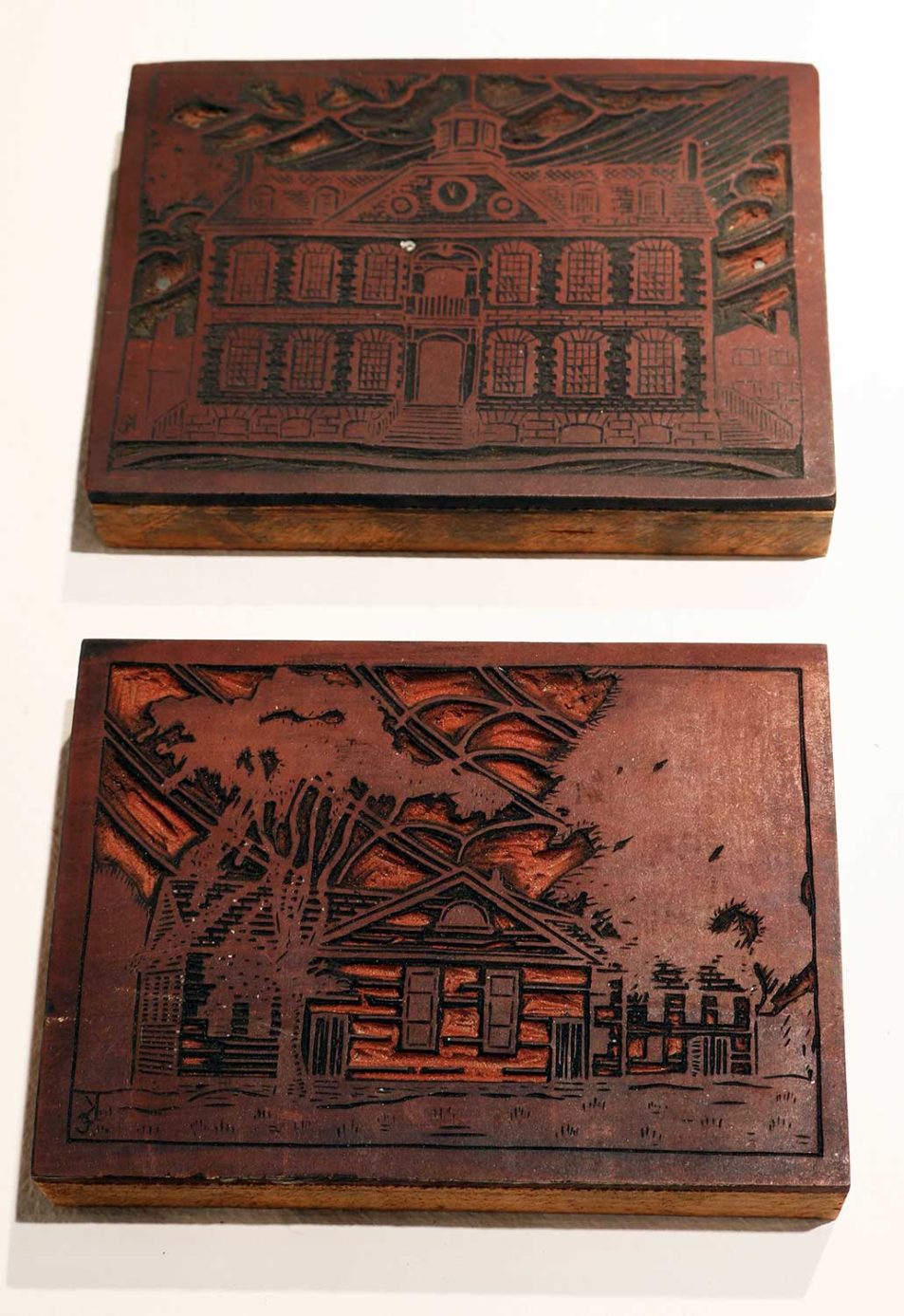 Ken Chaplin, a resident of Newport, Rhode Island, suffered from polio during his childhood. As a form of therapy he learned to carve woodcut-printing blocks. He enjoyed creating intricate scenes of landscapes, architecture, and everyday life. Seventeen of his woodblocks survive today and are preserved in the Newport Historical Society’s collections. He carved the blocks with the intent of making multiple prints. Growing up in Newport, a wealth of historic and architectural scenery surrounded Chaplin. This inspiration would serve as the basis for a collection of woodblocks he carved from 1940-1950. Each of the six blocks showcased in the “Curious and Collected” exhibition depict a Newport architectural landmark.

Great Friends Meeting House is depicted in the condition of the structure before it was restored to its 1807 façade. The front view highlights a gable that has a triangular pediment and a lunette window in the center.

Chaplin’s carving of the Colony House portrays the Georgian or Wrenian Baroque building in delicate yet precisely carved detail. The roof balustrade and cupola make the brick-building stand out along the Newport skyline.

Deeply carved by Chaplin, the Old Stone Mill is well known because of the tower’s controversial past. Some believe the Vikings built this structure, while others think it was built during the time of Benedict Arnold. Regardless of its origin, it is one of the  oldest structures in Newport.

Old Prescott House is one of the most difficult buildings to identify in Chaplin’s collection because it is not well known today. His intricate carving of the house highlights its gambrel roof, pedimented dormers, and veranda.

The last carving in Chaplin’s collection is Trinity Church. The church’s three-tiered wedding-cake steeple is unique to Newport. Designed by Richard Munday, the church was built in 1724-1726.

Carved into a wood block with a top layer of rubber, all of the images are approximately 4 inches x 5 inches. These dimensions are comparable to the dimensions of postcards produced during the same period. During the 1940s and 1950s, Newport was working to revitalize the city’s architectural heritage and resort culture. Postcards served as a way of doing so. Visitors to Newport were able to take tours of the city’s most famous buildings, such as the ones depicted in Chaplin’s woodblocks. After learning about their heritage, visitors used postcards to share their experience with their friends and family. Postcards not only captured the architectural history but also acted as souvenirs that contributed to the commodification of Newport’s resort culture. By depicting famous architectural landmarks Chaplin reveals his interest in preserving the architectural heritage and highlighting the rich history of Newport.  The six woodblocks in our exhibition are part of a larger collection of nine famous landmark blocks that Chaplin carved. These landmarks still survive today and can be visited as notable attractions to learn more about Newport’s heritage.

Yarnall, James L. Newport Through its Architecture: A History of Styles from Postmedieval to Postmodern. Hannover, NH: University Press of New England in association with Salve