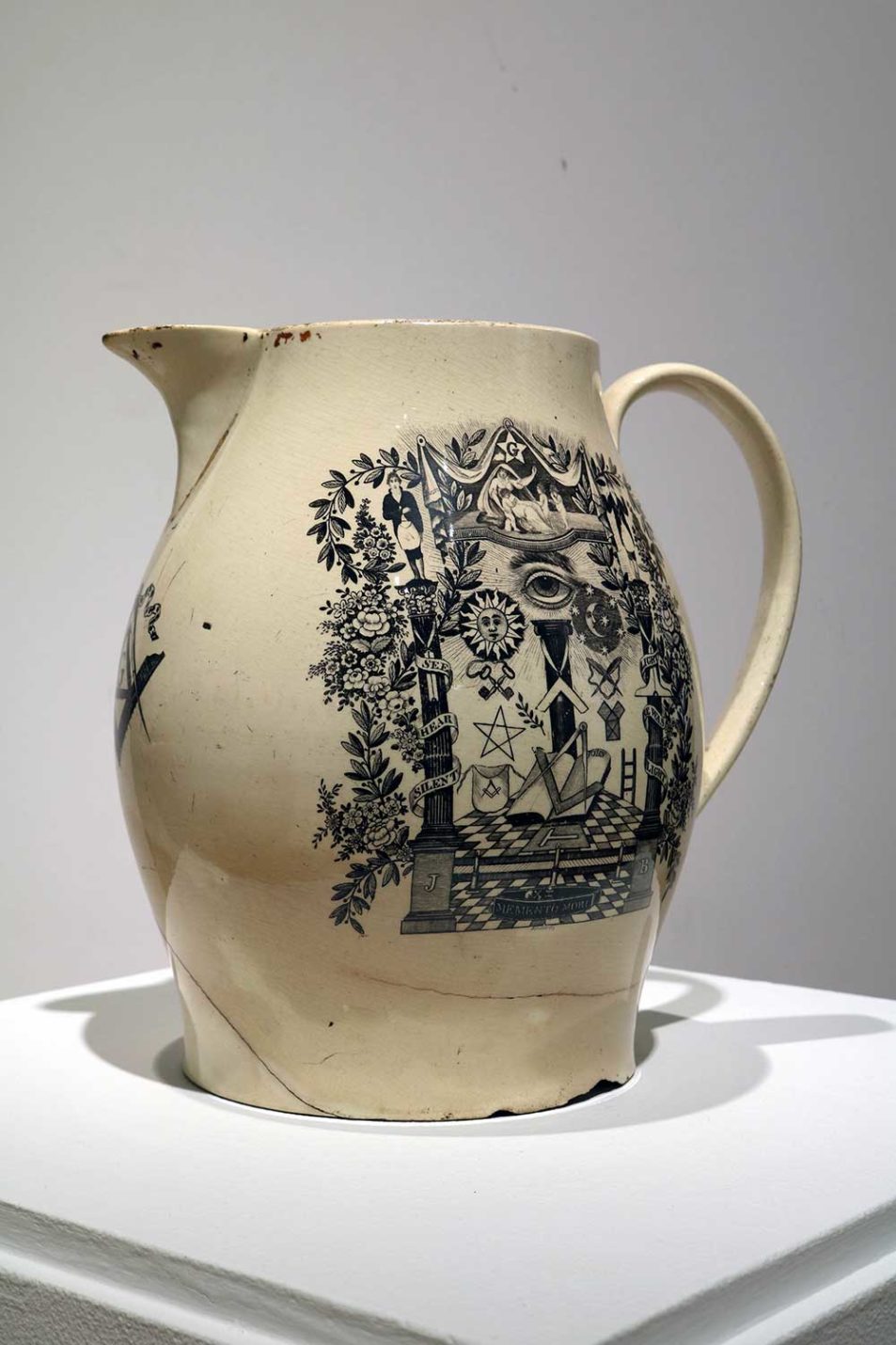 Iconography, utilitarianism, and history play an essential part in the life and use of the pitcher with masonic symbols.  This ceramic pitcher was made in between the years 1785-1820 as determined by the styling of the transfer pattern, type of clay, and barrel-like form. It stands 10.6 inches high, made from stoneware clay coated with a glossy ivory glaze and covered with etched black transfer patterns on its front, right and left sides.  This pitcher has a generous bowl and a gradually smaller neck, ending in a curved spout. It has a sturdy yet elegant unadorned handle that shares the same creamy glaze as the rest of the vessel. Prior to being in the Newport Historical Society’s collection, this piece was owned by a Mrs. Powel of Newport, who donated it to the NHS. Its particular significance to that family’s history is unknown, but one can assume that it was likely used to hold water.

The symbols present on the transfer pattern are of Masonic origin.  They point to the society of the early founding fathers of America and the manufacturer and inventor, Josiah Wedgewood. He developed a type of pottery that mimicked the fine china of the rich, but cost little to nothing to make. The transfers of these pots and pitchers were often patriotically themed, to better sell in the developing American colonies.  The freemasons themselves have no definitive founding date.  But scholars have found reference to the group in a poem written in the year 1390, and it is believed that they have been active since the early Middle Ages. The freemasons themselves trace their lineage back to the temple of King Solomon and take credit for its construction under the master mason named Hiram Abiff, who taught his followers the secrets of masonry. Among these lessons are laws concerning fraternity, secrecy, knowledge, and truth. In the year 1717, the grand lodge of London was formed and masonry moved with the British overseas into the American colonies. This fraternity played an integral role in the Revolutionary War, with notable leaders such as George Washington, Benjamin Franklin, John Hancock, and Paul Revere.

The symbols on this vessel are used to commemorate the culture and practices of the free masons who helped instigate the American Revolution. Some of the most notable symbols are the square and compass with a centralized “G” that appears under the spout of the pitcher, the symbol of the Pythagorean Theorem, and the All-Seeing Eye. The eye represents the absolute truth, God and the ‘revelation’ of the mysteries of freemasonry. Other more subtle symbols include the candle (for illumination), the apron (for craftsmanship), and the Pythagorean Theorem’s symbol (for mathematics and geometry) [see key for details].  These symbols on the creamware ceramic pitcher emphasize truth, wisdom, and the pursuit of knowledge through fraternity and loyalty to the brotherhood.  This pitcher serves as a reminder of the culture and ideals of post-Revolutionary America.

Square and compass with central “G”: This is a symbol for the practice of masonry itself, as well as an allusion to masonry’s past with stonemasonry, hence the square and compass for measuring angles. The “G” has not been given a decided meaning, but it fluctuates between God, Geometry, and Good.

Pythagorean Theorem: This symbol emphasizes the use of mathematics as a way to find truth because there is no disputing mathematical results, much unlike matters of philosophy and religion.

The All-Seeing Eye: This eye can be representative of many things, including god, higher knowledge, and observation/watchfulness.