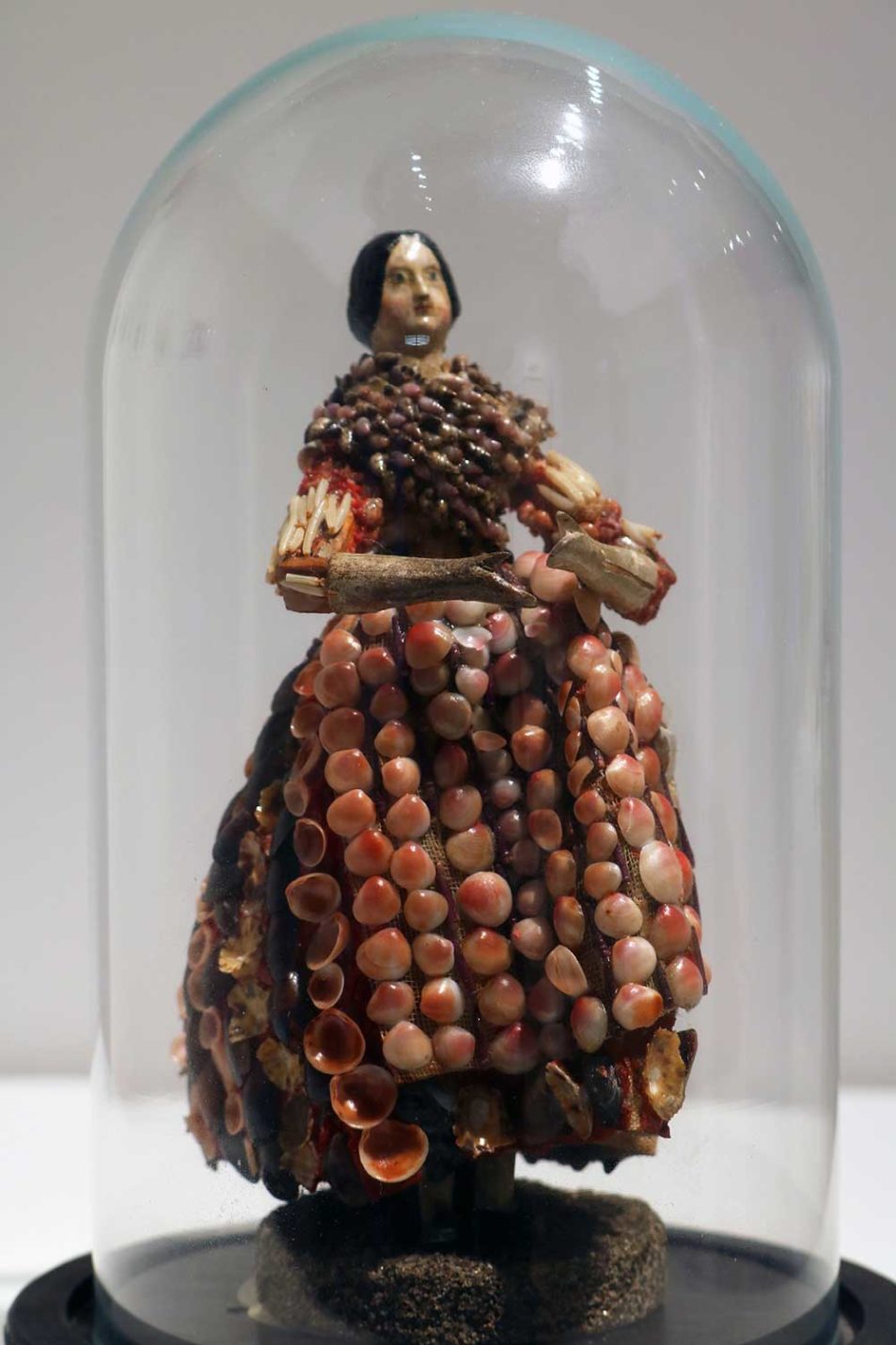 Shellwork Figure of a Woman

The Collection of Nicholas and Shelley Schorsch

The beauty and allure of the ocean have always attracted people to the coast and the treasures of the sea have been repurposed for home decor.    During the late 1800s, “shell work,” or the creation of decorative objects out of sea shells, became a new craft among Victorian women. “Shell Work Figure of a Woman” is made of sea shells, stone and glass pieces that are arranged to portray a woman with her arms out, palms up. Her head and arms are made of carved and painted stone, but her dress is constructed of shells. A series of small conical brown shells have been arranged to create a crossed shape across the shoulders and chest of the figure, giving the appearance of a shawl that ends at the waist. The shells of her long skirt are attached to a stiff, woven textile and are arranged in vertical columns with alternating colors to create stripes. The upper back of the figure has five pink shells arranged around a central white shell, similar to a five-petaled flower. This figure may have been created for sale as a souvenir or made by a hobbyist practicing the shell work craft.

This style of arranging shells emerged in Victorian England during the latter half of the 19th-century.  Elite of Victorian society aspired to appear cultured and well-traveled—the British highly romanticized exploration—which manifested in collecting, classifying, and recording. Cabinets of Curiosities exemplified this mindset and the display of natural objects showed this sort of scientific attitude. One women’s magazine from this period even gives advice for the display of found seashells in glass cases, by size, shape, and color, much like how they would be arranged in a Cabinet of Curiosity.

The shell work handicraft was mainly popularized among women. Because England had entered a period of financial stability after what was called the “hungry forties,” a middle class emerged. There were now a whole group of people who had the luxury of leisure time as well as a concern with social standing. Most were expected to spend their leisure time in a respectable way, and many chose to craft as a means of beautifying their home and appearing cultured. Periodicals for women such as Godey’s Lady’s Book and books like Casell’s Household Guide were intended for this demographic— middle class women who now had the luxury to concern themselves with what was considered “good taste.”

Shells could be bought from the store for use in these projects, or they could be collected from the seaside. One women’s journal describes the process of cleansing shells first by plunging them into scalding water to kill any living fish that may be inside, extracting fish from univalves with a crochet needle or hooked wire, and using a knife to remove “the animal” from bivalves. They could then be deodorized and sanitized with a weak solution of chloride of lime.

The shell work handicraft reflected the Victorian zeitgeist— the zeal for exploration, collection and classification. And though shell work reached its peak popularity during the late 1800s, similar objects can still be bought today in coastal towns around the world.

Henderson, Marjorie, and Elizabeth Wilkinson. Whatnot: A Compendium of Victorian Crafts

& Other Matters, Being a Compilation of Authentic Home & Hand Crafts Popular in the Era of Her Most Excellent Majesty, Victoria, by the Grace of God Queen. New York: Morrow, 1977.